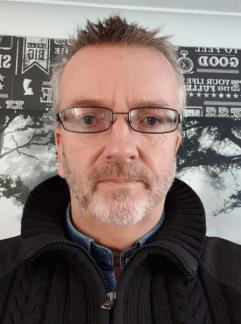 My employment with BT Group started back in October 1983 as a Building Services construction electrician, working on power supplies for BT buildings and equipment. After the strike in 1987 I joined the Branch committee of Brighton engineering Branch where in 1989 became an assistant Secretary.

Having had spells as Vice Chair, Branch Chair, and Union Safety Rep and having attended many Trade Union courses at Alvescot Lodge I was encouraged and took the position of Branch Chairperson in 1992, and started duties within that role, after being awarded time off to complete Union duties from BT, and became a full time Union representative in 1993.

We have a good cross section of 23 branch committee representatives, that meet 4 times a year and cover all areas from Hastings to Sevenoaks to Shoreham in West Sussex. There are another 3 Full time Union officers, and another 6 or so junior Branch officers assisting the Branch

Over the last 5 years it has been great to carry out the role of National Team members to the BT Supply Chain business unit, part of Enterprise, of which I am an employee of. It involves travelling all over the UK and accounts for around half of my Union time

We pride ourselves as being a Branch that actively recruits, and gets out and about, to meet Branch members. Would be nice to BUMP into you at some stage- or feel free to give me a call
If you have any issues you wish me to assist with please contact me via email or the contact details as stated on the home page.